Guide to Relevant Fonds by Schools

University of Manitoba National Research Centre for Truth and Reconciliation 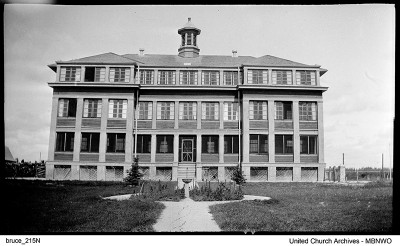 Opened in 1915, this building included classroom space and accommodation for 80. Some years as many as 100 lived in the building.

Operated by the Methodist Missionary Society and, after 1925, by the Board of Home Missions of the United Church.

For a fuller history of the school see The Children Remembered, United Church of Canada Residential School Project.

The residential school at Norway House had its beginnings as a Methodist boarding school in 1899 along the shores of Little Playgreen Lake in northern Manitoba, eventually occupying 40 acres of the Norway House Reserve. 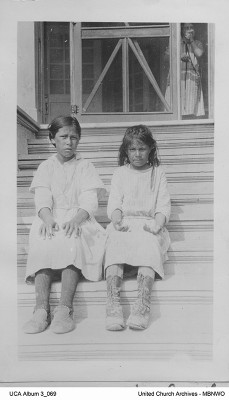 The day school at Norway House, begun by missionary James Evans in the 1850s, could not serve the children of families who still followed a nomadic way of life. But the Methodist plan to send the children from their northern missions to the new Brandon Industrial Institute, which opened in 1895, were met with opposition from the parents who did not want to send their children so far from home. The Department of Indian Affairs agreed to fund a residence for up to 50. The initial enrollment was 56 boarders, supervised by a staff of three. These children, along with about 60 others from the reserve, attended the day school, which had one teacher.

The original school, poorly built and very poorly maintained was destroyed by fire in 1913 (see photo) and a new building, designed for 80, and with two classrooms, was opened in 1915. Enrollment was consistently 30% beyond capacity. Overcrowding was a constant problem. Several reasons lead to the expanded numbers; one was the insufficient per student grant from Department of Indian Affairs. Conditions at the school were documented as concerning and some communities refused to send their children there. A farm was begun in 1919, and 30 acres of the site on which the new building stood, was put under cultivation with hogs and dairy cattle introduced. The food produced was used to help feed the children. 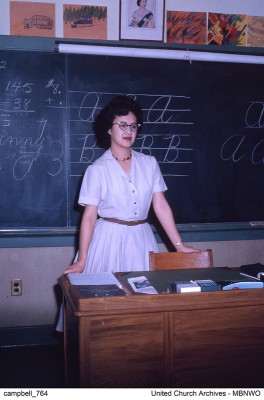 Verna Kirkness taught at the combined Residential/Day School at Norway House, here in 1962.

Beginning in the 1920s, Norway House became a tourist destination for people traveling up Lake Winnipeg on the steamers. The picturesque land of lakes, rocks and trees attracted naturalists and adventurists. Postcards of the iconic, and at least from a distance, stately, school building were common. (See 1972 Document below)

Like other residential schools of the period, the school program emphasized the teaching of practical skills and instruction in agriculture in a pattern that saw children in classes for half of the day and working for the other half.  This changed in the 1940s. Children came to Norway House from ‘United Church’ settlements at northern reserves such as God’s Lake, Oxford House, Red Sucker Lake, Island Lake, Nelson House, and Cross Lake as well as Norway House.  In later years, Anglican children came from other communities where there was no United Church.

A second fire in 1946, destroyed the building. (See 1946 document below). From 1946 to 1954 there was no residential school in operation at Norway House. The question of rebuilding was debated as there was growing interest in having day schools so children could remain at home. The United Church was skeptical though of the government’s commitment to build the day schools so in the end it was rebuilt, but with the school and residences separated. 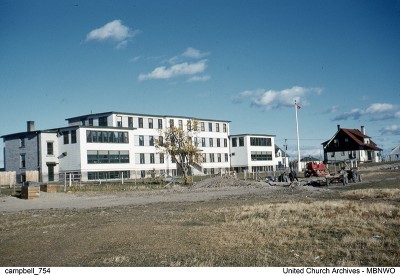 After the 1946 fire, the United Church debated rebuilding the residential school, aware of the desire for communities to have day schools to keep their children at home. The school was reconstructed and opened in 1954. When it was closed as a residence in 1967 it became a day school.

The third residential school opened in 1954 with a capacity of 150 children aged 6 to 16 years. (See 2007 document below)  Within a decade, it was apparent that the need for residential schools was ending as First Nations people settled in permanent communities and more day schools had been built. By 1967, residential enrollment had fallen to 61 while the school had 250 day students. The United Church decided, upon the recommendation of Hudson Bay Presbytery, (See 1965 and 1966 documents below) to close or withdraw from the school. Indian Affairs closed the school and Principal Bernard Lee completed the task in the summer of 1967.  The residence buildings were converted to serve the day school.

The fires of 1913 and 1946 destroyed many of the early records of the Norway House School. The Archives holds photographs of Norway House from the 1930s; the Mary Bruce Fonds, and the Dorinda Sturdy Stonehouse Fonds. Personal papers of James T. Blackford, J. Albert Lousley and Roscoe Chapin, all of whom served as Principal of the school, are in the Archives. Print records are primarily from the 1950s (after the 2nd fire) until the closing of the school in 1967. Many of these records were created by Bernard Lee, the last principal of the school. In addition, there are records created by the Manitoba Conference Superintendent of Home Missions and other staff related to the Board of Home Missions. Records include correspondence, reports, meeting notes, financial records, diaries and log books. The Margaret Reid May Fonds include photographs, diaries and correspondence from when she taught at the school (1957-59). (Her autobiography is below.) See the 2014 Index of IRS Related Records for details on the holdings, and the Guide to Relevant Fonds by Schools. Some records exist in the United Church General Council Archives, including photographs. Other records are held by the Federal Government. 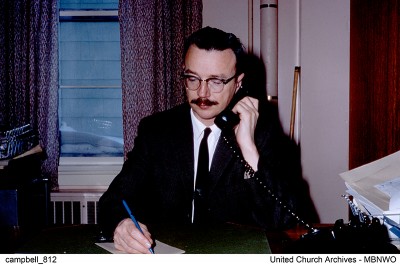 Bernard Lee, Principal, here in 1965 as he made the recommendation to the church to close the school, which was done in 1967.

All the digitized records, as well as all the paper files in the Archives, are available to researchers. Contact the Keeper of the Archives for more information and to request copies or to use these documents.

The following documents are only a very small sample from the holdings related to Norway House Residential School. They have been chosen to give a flavour of the kind of documents available and to provide a glimpse into the school in different eras. This small sampling is insufficient to make a thorough assessment of the school and those involved in it, yet, the documents shed light on attitudes, levels of power and authority, methods of communication and the context of their day. (To view Norway House photographs and other exhibits see links above right.)

The language and views expressed in these historic documents are not censored.  They are not reflective of the Church today. For information on current United Church of Canada right relations work -including apologies to survivors of Residential Schools please visit www.united-church.ca

A story of the short life of Anna May, a young Cross Lake, Manitoba orphaned child who is a student at Norway House.

Three topics are covered in this letter: the duties of the position of Seamstress; a question about staff getting married; hiring a local person to clean the school. 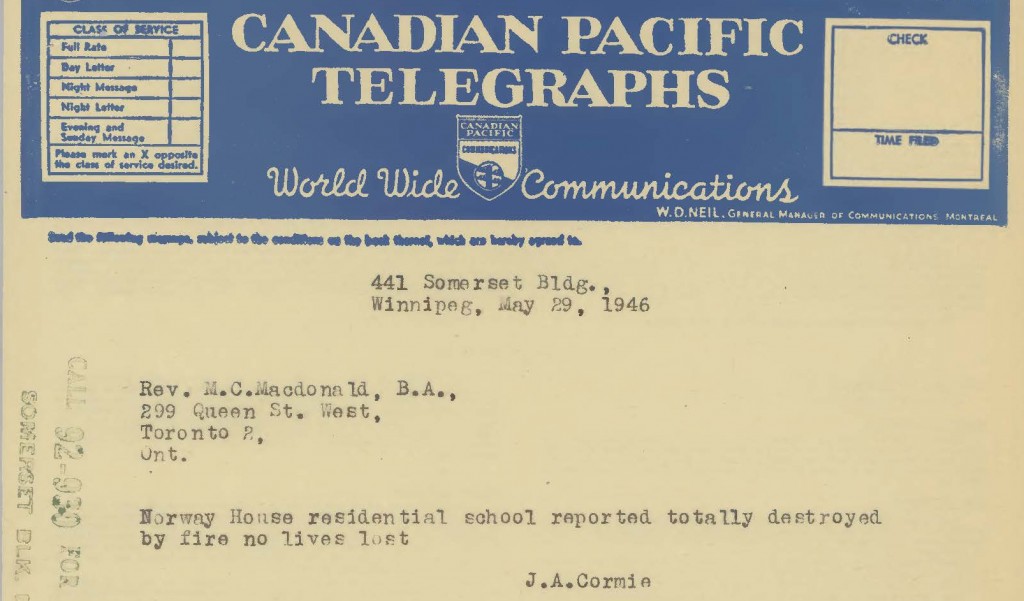 This exchange of correspondence about a possible location for a new school demonstrates the relationship and decision making between the church and government. The people on the reserve are not copied in the correspondence.

The report contains a short history of Norway House Residential School, a summary of enrolment by community from 1961 to 1965 and recommendations on closing the school in favour of day schools and where not possible moving children to foster care or smaller residences that are more home like. This report is considered in the following response from the Presbtyery. 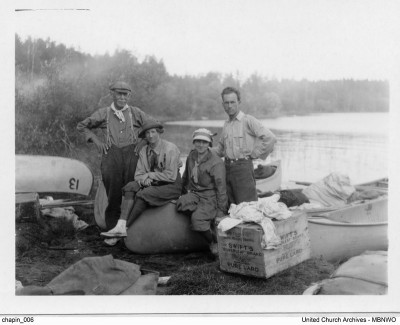 Discussion on closure of Norway House Residential School in 1966 and who has authority.

Chapin describes Norway House School when he arrived there in 1920 to begin 2 years of teaching. His wife Etta had been at the school prior to his appointment.

2007 “A Northern Adventure: My memories of living in Norway House and teaching at the Norway House Indian Residential School 1957 to 1959” by Margaret (Reid) May (Reid May Fonds, c272 d2)

An autobiographical reflection on two years at Norway House, using primary sources which are also in the Reid May Fonds, including a diary and correspondence.