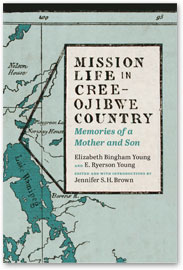 In May of 1868, Elizabeth Bingham Young and her husband of only five months, Egerton Ryerson Young, began a long journey from Hamilton, Ontario, to the Methodist mission of Rossville, at Norway House. Over the next eight years, Elizabeth supported her husband’s work at Rossville and then at the newly founded mission of Berens River, on the east shore of Lake Winnipeg.

Her memoirs along with those of her eldest son Eddie, had lain unknown for a long time, while the books of E.R. Young himself were well known. This project brought to life two other family voices that contribute their own distinct perspectives on the Youngs’ life at Norway House (1868-73) and Berens River (1874-76) and resulted in the book Mission Life in Cree-Ojibwe Country: Memories of a Mother and Son, by Elizabeth Bingham Young and E. Ryerson Young, ed. by Jennifer S.H. Brown, published by AU Press, Athabasca University in December 2014.  Follow the link (immediately above) to download a free copy of the book which is licensed under Creative Commons.

Jennifer Brown is the great, great grandaughter of Elizabeth Young.  She writes, “I first began the study of the Young papers in the 1970s when the Youngs’ grandsons, including my father (Harcourt Brown) began gathering the materials together to be preserved in an archive; they are now in the United Church of Canada Archives in Toronto. I had the memoirs in mind for a long time, but had no time to work on them until I retired. Once I could study them in depth, I was quite astonished at how rich, detailed, and personal they proved to be. It is rare to have such fine records from both a mission wife/mother, and from a missionary son—who left Berens River at age 7 but had such remarkable memories that they stayed with him throughout his long life.” From the United Church Archives in Winnipeg, Brown found particularly useful the Norway House baptismal registers and other records concerning Rossville, and missionaries such as James Evans and John Semmens. The support of Diane Haglund, the archivist during her research was also greatly valued.

In the remote northern outposts, Elizabeth gave birth to four children, one of whom died in infancy, acted as a nurse and doctor, and applied both perseverance and determination to learning Cree, while also coping with poverty and a chronic shortage of supplies, both in the mission and in the community it served. When she died, in 1934, she left behind various reminiscences, notably an extended account of her experiences at Norway House and Berens River. Her memoirs offer an exceedingly rare portrait of mission life as seen through the eyes of a woman.

Elizabeth’s first child and only surviving son, also named Egerton Ryerson Young but known in his youth as “Eddie,” was born at Norway House in 1869. Cared for by a Cree woman almost from the time of his birth, Eddie spent his early childhood immersed in local Cree and Ojibwe life, culture, and language, in many ways exemplifying the process of reverse acculturation often in evidence among the children of missionaries. He, too, left behind hitherto unpublished reminiscences, one composed around 1934 and a second dictated shortly before his death. Like those of his mother, Eddie’s memories capture the sensory and emotional texture of mission life, a life in which the Christian faith is implicit rather than prominently on display, while also providing an intriguing counterpoint to his mother’s recollections. Like all memoirs, these are refracted through the prism of time, and yet they remain startling in their immediacy. Together, the writings of mother and son—conjoined here with a selection of archival documents that supplement the main narratives, with the whole meticulously edited by Jennifer S. H. Brown—afford an all too uncommon opportunity to contemplate mission life from the ground up.

Jennifer S.H. Brown, FRSC, Professor Emeritus, taught history at the University of Winnipeg for twenty-eight years and held a Canada Research Chair, Tier 1, in Aboriginal history from 2004 to 2011. She served as director of the Centre for Rupert’s Land Studies, which focuses on Aboriginal peoples and the fur trade of the Hudson Bay watershed, from 1996 to 2010. She is general editor of the Rupert’s Land Record Society documentary series (McGill-Queen’s University Press), which publishes original materials on Aboriginal and fur trade history. She has published several books and many articles on these topics, on Aboriginal-missionary relations, on Metis history, and also on anthropologist A. Irving Hallowell and the Berens River Ojibwe—notably Chief William Berens who made Hallowell’s fieldwork in the 1930s possible. She now resides in Denver, Colorado, where she continues her scholarly work.